the 4 stages of learning to think positively 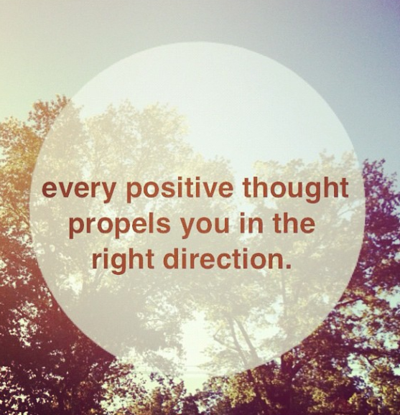 Remember on Friday when I said I had big news for you this week?

On Wednesday I'll be featuring an extra special, mid-week post
loaded up with all the exciting details!

For most of my childhood and young adult life, I believed a positive attitude was a genetic trait, something you were either born with or had to do without. I thought some people (like my mom) just sparkled with positive thinking and others (like me) walked around, Eeyore-like, under a cloud of negativity. Because I thought it was ingrained in me, I embraced negativity. I catered to it and let it bubble to the surface whenever positive thoughts started to come my way. I adopted the "if you can't beat 'em, join 'em" attitude when it came to negative thoughts.

It wasn't until I reached my mid-twenties that I had this life-changing revelation: positivity isn't innate; positivity is learned. (Happiness, on the other hand, is a little more complex, with studies showing that 50% of our happiness is set from birth, 10% is impacted by our circumstances, and 40% is influenced by our own actions.) Positivity is part of that 40% of our happiness, the part we have control over, and a positive attitude is something that can be taught, just like any skill.

When I was younger, I didn't realize the difference between happiness and positive thinking. Happiness you don't always have control over. Positive thinking, you do. For some, positive thinking comes easily -- it's a skill they're born with and don't have to think much about. For others (like me), positive thinking is initially a struggle. It took me awhile to get from being the kid that was given Eeyore stuffed animals as gifts to being the woman who recently received the gift of a shopper bag with the words "Think Happy. Be Happy." stitched on the front.

A lot has changed for me -- especially over the past few years -- and it's made me see that positive thinking is, for many people, a learning process. It's a skill that must be learned. While reading Peace, Love & Foster's "What You Don't Know" article the other day, I realized that the four stages of learning Juliana wrote about apply not only to dog training (and learning in general), but also developing the skill of thinking positively.

The Four Stages of Learning to Think Positively

The four stages of learning (or competence) were developed at the Gordon Training International, possibly by Abraham Maslow. According to good ol' Wikipedia, "The Four Stages of Learning provides a model for learning. It suggests that individuals are initially unaware of how little they know, or unconscious of their incompetence. As they recognize their incompetence, they consciously acquire a skill, then consciously use that skill. Eventually, the skill can be done without consciously being thought through, and the individual is said to have unconscious competence."

I don't know if these stages will be true for everyone who struggles with learning the skill of thinking positively, but they certainly were for me. It took me decades to get through these four stages -- and now I feel like I may be at the fifth stage, a debated and more recently added stage know as reflective ability, or "conscious competence of unconscious competence," meaning I'm aware of being unaware of my ability to think positively. Now that I've reached this stage, I'm able to see how I got through the other stages (and share my thoughts on how you can get through them if you, too, are struggling to think positively).

When I was younger, I had no idea a positive attitude was something that could be learned. I thought it was just something other people had -- something I usually didn't even want because their cheeriness irritated me. Not knowing I could, if I wanted to, create my own positive attitude made it very difficult for me to believe that I could someday see the world through a lens that wasn't clouded by negative thoughts. Stage 1 is the most difficult stage when it comes to learning to think positively because you don't know how much power you have over your thoughts.

Stage 2: You do know what you don’t know.

At some point -- I'm sure through reading articles on happiness and taking a more proactive interest in my personal development -- I started to realize that positive thinking could, in fact, be learned. Happiness, at least half of it, might be something people are born with, but a positive attitude could be created and cultivated. Of course, coming to this realization didn't mean I suddenly had a positive attitude. It meant only that I knew I could have one. Getting from Stage 2 to Stage 3 -- from realizing I could be positive to actually being positive -- was the tricky part.

Stage 3: You do know what you do know.

In this stage -- the hardest and probably most exhausting stage -- I got to work on creating a positive outlook for myself. I did this by studying other people, people oozing with positivity. I did this by reading articles and books on positive thinking. I did this by practicing. In therapy, I learned that our brains could be changed. The patterns of thinking that had once seemed so hardwired could actually be reworked. I worked hard at reworking my brain, spending endless hours reading (and writing) about positivity. Even when it was hard, I practiced, practiced, practiced.

Stage 4: You don’t know what you do know.

In time, the act of thinking positively -- even when I didn't necessarily feel positive -- started to come naturally. When I faced a difficult situation, my initial thoughts were no longer to give up or give in. Instead, I looked for the good in the bad. I started to see the silver linings (even though I often had to squint to see them). I might not feel (or even act) positive at all times, but my thoughts are now reflexively looking for the good, striving to make the best of any situation. Back in Stage 1, I didn't even know it would be possible for me to escape from underneath a cloud of negativity, but now it would be a struggle for me not to seek out a silver lining.

Changing the default setting in your mind from negative to positive doesn't happen overnight. It, like any skill you aren't innately blessed with, takes some time to master. In many ways, it comes naturally to me now, but not always. I still have to work on it, to constantly sharpen my skills. It's like that with most learned things, I think. You have to keep after it. There's that old saying: "you never forget how to ride a bike." Sure, you might never forget how to ride, but you're not going to be very good at riding if you never practice it. Practicing positive thinking is the only way you'll ever get to stage four, to making it an almost effortless part of your life.

Are you getting excited for Wednesday and the big news coming from Positively Present? You should be! Exciting things are coming your way. Get pumped! In the meantime, keep practicing that positive thinking!

You are SO on target! Your four stages are pretty similar to mine, but our journeys were different.
I got to number 3 as a result of changing my career and helping others as a Certified Hypnotist. As I learned that what I was doing was really helping others direct their thoughts, I began to notice positive changes in myself.

My upcoming book, Powerful Thinking on Purpose is a result of my journey and my goal is to introduce people to how their mind works and how they can use thoughts to improve their life.

Wendy - So glad you could relate to this post! Getting to Stage 3 can be really hard (and there are so many different ways to get there!), but it's amazing what happens when you start actively choosing to focus on the positive. Your book sounds perfect for anyone struggling to change their thinking patterns.

Thank you from Greece :)

Enter your email address in the box below to receive the weekly Positively Present Newsletter.