ABOUT SUBSCRIBE BOOKS ART PRINTS CONTACT PATREON
back in the saddle : doing what you used to love again
the 4 stages of learning to think positively 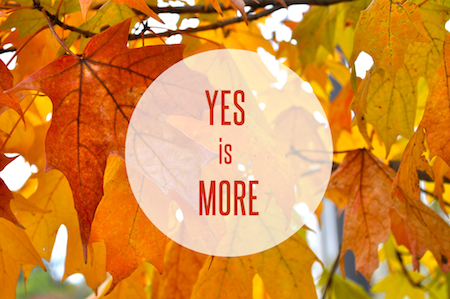 “Probably some of the best things
that have ever happened to you in life,
happened because you said yes to something.
Otherwise things just sort of stay the same.”

Having seen the negative impact of saying "yes" too often (no time for yourself! feeling constantly stressed! doing what you don't want to do!), I'd always been determined to be the kind of woman that didn't say "yes" when she really wanted to say "no." Sometimes I'll do things I don't want to, I'll help people out when they really need it, I'll go to those events that I should go to -- but I don't make a habit of these things. I've always prided myself on knowing when to say "no" -- and having no problem saying it.

But last night something happened that made me think about my yes/no philosophy differently. I watched Yes Man.

The portrayal of main character Carl (played by Jim Carrey) in his pretty apartment spending night after night watching TV on the comfort of his couch while making up excuses about why he couldn't attend events with his friends really struck a chord with me. In fact was me (the only key differences being that I have a great guy and a cute pup sitting on that couch with me). These days, I'd much rather say in than go out. After all my years of partying, I've finally come to terms with the fact that I actually have more fun staying in -- and I've learned to be okay with that. But I've also started to use it as an excuse. An excuse to say "no."

Watching the movie last night, I had a revelation: I need to start saying "yes" more. I don't have to say it all the time (as I know that leads to living life for others and not doing what I really love most), but I need to at least make it part of my vocabulary. I've been so dead-set on not becoming one of those women that does everything for everyone else (and nothing for herself) that I've become the kind of person that ends up missing out on life's "yes" moments. But it's time to change that. It's time I stopped saying "no" and started saying "yes."

5 Reasons to Say Yes (Even When No Seems Easier)

1. Experience something new or different. New experiences and people can be difficult for those who don't love change, but the more you open yourself up to the idea of saying "yes" the more you'll start to see that new experiences are actually quite fun. Saying "yes" doesn't always lead to new or exciting things, but it can. And staying in the same routine day after day, saying "no" to invitations and offers, is pretty unlikely to lead you to anything new or different. Even when it seems tough to say "yes", remember that you never know where a simple "yes" will lead you ...

3. Overcome fear and insecurity. Part of the reason most of us "no people" say "no" is because we're scared. We're scared of new people or new experiences. We don't want to break from our routines or try something new for fear that we won't enjoy it or we'll look silly doing it. But the more you say "yes," the more you'll face those fears and insecurities head-on. And the more you face them, the less intimidating they'll be. Every "yes" is a step away from fear and toward the freedom of feeling comfortable in any situation. Saying "yes" (even when it's a scary thing to say) is basically the same thing as saying "no" to fear, doubt, and insecurity.

4. Meet new people (and future friends!). If you're like me, you might be thinking, I already have friends. I don't need any new ones! But remember: you probably would have said that same thing before you met your current best friend. Some of my best friends have come into my life as a result of saying "yes." I said "yes" to attending a happy hour I didn't really want to go to and connected with one of my favorite people that night. I said "yes" to job offers and met two of my best friends. So many friendships begin on the basis of random coincidence. You never know who will be on the other end of that "yes."

5. Venture outside of comfort zones. Much as you might love your comfort zone (I sure love mine!), venturing outside of it can do a lot of good. It keeps you mentally sharp, teaches you new life lessons, and introduces you to things you might someday consider comforts. If you struggle when it comes to pushing yourself out of your comfort zone, remember that saying "yes" is a good way to get started. Say "yes" to something that scares you. Say "yes" to an activity you automatically turn down without any good reason. Say "yes" to breaking your daily routine (even just for a day).

While doing some research for this article, I came across so many articles on the benefits of saying no, on how to say no, on why we should start saying no. There are clearly a lot of people out there in the world who struggling with saying "yes" when they really mean "no," but I bet there are also a lot of people out there who aren't saying "yes" when they should be. It's not about saying "yes" to everything (as Carl did in Yes Man); it's about knowing what you need more of in your life. Some people need more "no," some people, like me, need a lot more "yes," and some people need to start saying "yes" and "no" to the right aspects of their lives.

Whether you're a Yes (Wo)Man or a No (Wo)Man, it's time to think about why you are what you are -- and if you really want to be that way. When you say "yes" or "no," be conscious of your choices. Are you responding that way because that's how you always respond? Or are you letting fear or obligation take the reins? Life should be a balance between saying "yes" and saying "no" and, if you're anything like me, it's time to start realizing that yes can actually be more.

YES!!! I love it. I definitely believe in saying YES, especially if there's some fear + excitement involved. Usually leads to a whole lotta greatness. I do - however - believe that saying No can be extremely powerful, especially if when saying No to others means saying YES to yourself. ;)

Jia Ni - Great point! Sometimes saying "no" is a way of saying "yes" to yourself!

I needed to hear this, i'm one of those who often say no and make an excuse! Learning to say yes when i can now!

Laura - Me too! It's going to be hard to actually live up to what I've written here, but I'm going to try!

Ralph - Thanks for your comment! It reminded me that, really, it's all about balance. We shouldn't always say yes or always say no. We should have a mix of both in our lives!