ABOUT SUBSCRIBE BOOKS ART PRINTS CONTACT PATREON
how to keep the spirit of christmas all year long
how to make spirits bright (in January!) 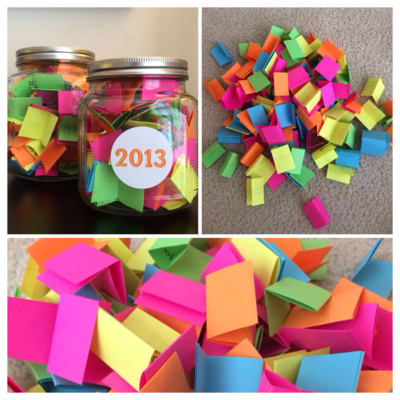 If you've been following Positively Present for awhile, you might recall that, back at the beginning of 2013, I decided to create a jar of happy things to fill in the year ahead. During 2013, I collected my favorite moments of the year—everything from the little things, like a joke that had me cracking up, to the big things, like signing my first book deal!—by writing them down on bright scraps of paper and storing them in a jar. (To my surprise, I filled up the jar quickly and had to buy another one!) It was a simple exercise—all I had to do was jot down my favorite moments and stash them away—but it turned out to be a really worthwhile activity, loaded with surprising, positive benefits.

While collecting my moments for 365 days, I didn't think too much about it. My focus wasn't on what I was getting from writing down these little moments, but instead on simply celebrating the moments and feeling joyful as I wrote them down and stored them. However, when I cracked open those jars on January 1, 2014 (a day later than I'd initially planned, but actually a nice way to kick off the new year), I realized that the months and months of jotting down these happy moments actually had some really wonderful benefits. Here's the benefits I reaped from doing this little project—and benefits I think you too could reap if you decide to give something like this a try in 2014:

YOU NOTICE WHAT MATTERS MOST TO YOU.

When I opened up those jars and started unfolding all of those pieces of paper, I was surprised by some of the things I'd written down. In particular, a lot of my notes started with "Cracking up about..." or "Laughing so hard over..." While I would be the first to admit that I love to laugh, seeing all of these laugh-out-loud moments captured throughout the year made me realize how important laughter is to my happiness. (Also important to my happiness are friends, dogs, and creating things.) I didn't expect this to be a soul-searching sort of exercise, but it ended up turning into one, showing me the things that mattered most to me in 2013 and reminding me to focus on these things more in the year ahead.

While unfolding the notes, I was surprised by how grateful I felt for all of the happy moments I'd experienced throughout 2013. When I thought back on the year, as I often do at year's end, I considered it to be a pretty good year. But when I looked through all of my notes, unfolding all of those little moments of joy, I was overwhelmed by how many great things had happened in just 365 days—many of which I'd forgotten all about. I also noticed how frequently certain people were mentioned, making me realize how valuable (and positive!) some people are in my life, and filling my heart with gratitude for those who matter most to me.

YOU FOCUS ON LIFE'S POSITIVE MOMENTS.

One of the best things about creating this jar was the push it gave me to focus on the positive moments in my life. It's really hard not to dwell on the things that go wrong. (It's human nature I think, to ruminate on the tough stuff, maybe as a way to protect ourselves from future pain.) But with this jar in the back of my mind, I found myself looking for the little positive moments, searching for things to write down and store in the jar. The more I looked for those moments, the more I found them. And writing them down later brought back a feeling of joy similar to what I'd experienced in the moment itself, almost as if I got a two-for-one deal on positive feelings.

YOU CREATE A SIMPLE, POSITIVE HABIT.

Creating habits isn't all that hard. Creating positive habits, on the other hand, can be a bit of a challenge. Having this jar helped me to create a habit that was both positive and relatively simple. I clearly got a lot out of storing notes in the jar all year long (much more than I thought I would!), and it was relatively easy to do, making it a great habit. Anything that's simple but offers lots of benefits is a great sort of habit to start, don't you think? There aren't too many of those habits out there (at least, not to my knowledge) and I'm so glad that I picked up this one, a habit I'm hoping to continue for many more years to come.

YOU CELEBRATE THE LITTLE THINGS.

When it comes to life's happy moments, we often spend a lot of time celebrating the big events—birthdays, graduations, new babies, new puppies, big wins at work—and sometimes the little moments get overlooked or forgotten. When I kept this little jar right by my desk, I was constantly reminded to look for things to celebrate, causing me to look past the big events and seek the little moments of joy that happen almost every single day. For example, I found joy not just in the day my new puppy, Barkley, arrived, but also in the first time she was confused by the sight of a firefly or the first time she tentatively touched snow. All of the little moments were recorded, providing me with a much more robust view of joy I'd experienced when I looked back on the year.

I loved this little project so much that I'm going to do it again in 2014, but I've decided to switch it up a little bit. My one issue with doing this was that I don't know what to do with all of these little scraps of paper now that the year's over. I don't want to throw them away, but I'm a big fan of eliminating clutter (and nothing says clutter like hundreds of scraps of paper!). So I did some searching online and found something that I can use year after year—and something that will sit neatly on the shelf next to my desk without looking as unruly as a scrap-filled jar. (No offense, jar. It was good while it lasted.) I found these Perpetual Calendar Pages on Etsy and purchase them with a gift card I'd received for Christmas (thanks, McNeal family!). I love the organization of the tabs and dated cards, and I really love the fact that I can use them year after year after year.

In 2013, I didn't write something down on a daily basis—only when the mood struck me—but I think this new layout will encourage me to find something worthwhile in every single day, which will be a great way to stay positive all year long. Now all I need to do is find (or make?) something colorful to store those cards in so that it catches my eye and reminds me to jot down all the happy things this year will surely send my way...

What a great idea!!! I keep seeing the jar idea , too but this way seems easier. Plus, you can be reminded from year, to year of what were you were grateful for in years past. Thanks for sharing.

Love this idea! I actually like the bright colored pieces of paper ... very cheery! After the year is over you could transfer the scraps of paper into a ziploc bag labeled with the year. The ziploc bag is easy to store in small places, and when you need a little "pick-me-up" you can grab a bag and look through all those moments that made you happy from previous years.
- Pam

im 18 and i have been doing almost this same thing for a few years now. every year i somehow receive a dated dairy, so every day i right down things under three headings: what im thankful for, what im sorry for and what i learnt. looking back through the pages has helped me so much as a teenager. p.s love the colorful pages though =)

This is such a great idea! Since January 1 I've been trying to write down a couple of things from each day. I call it 'Today will be remembered for...' and while it doesn't necessarily have to be positive, just the things that happen, it seems to mainly be about great things. I also added 'The best part about today was...' which I like because it forces me to think about the things I enjoyed most about the day. A pattern is forming already and it's clear the best parts of my day are when I'm moving (running/walking) or actively playing games with my kids or with my friends!

So many people would no doubt feel so much happier if they engaged in these simple little things.

I started a gratitude journal, which sounds similar to what you did in 2013. I kind of like the idea of filling up a jar though. It's a great way to visualize the goodness in life. I think I might do that this year!

Sherry - I'm excited about trying the new idea. I hope I'll enjoy it as much as I did putting all of those little scraps of paper into the jar.

Pamela - Great idea! I decided to save my 2013 scraps in a little baggie so I can go back to them next year or whenever I need a little reminder to be grateful!

Cindy - Keeping track in a diary is a great idea too. I keep a daily planner so that might be something to consider. I'm a little bummed that I won't have all of the color this year, but I'm trying think of creative ways to keep it colorful.

Kate - Thanks! I love your idea of tracking a few things in order to pick up on patterns. That's a really brilliant idea and could be really helpful for getting more in touch with yourself and figuring out what you need more (or less) of in your life.

Carmen - A gratitude journal is a great idea too! I had one of those and it really helped me to stay grateful (though I often forgot to write in it, which was the only downside!). The jar definitely caught my attention every time I walked by it, which helped remind me to stay focused on the good things in life.