seeking similarities: the value of sameness 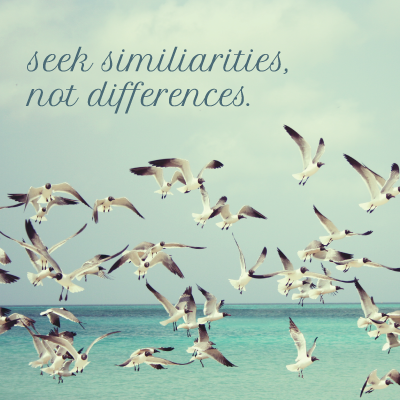 Not long ago, I signed up for emails from Caroline over at Made Vibrant and her latest newsletter really spoke to me. In it, she discusses how much choosing to make a change in her life has impacted the way those around her react. Anyone who has ever tried to make a big life change — giving up drinking, going vegan, launching a solo career, etc. — probably knows what she's going through. People have a lot of questions, and most of those questions aren't very positive. Caroline makes some very astute observations as to why this is, writing:

We, as a culture, are primed for polarity. When you make a decision to live differently than the majority of society, people react as if it's an attack on their own lifestyle...In this world of social-media ranting, media sensationalizing, and an explosion of content creators for every niche cause under the sun, it's easy to feel like we have to be primed and ready to defend our choices and our beliefs at any moment...We've been conditioned to focus on how we're all different rather than how we're all similar.

Noticing our differences isn't necessarily a bad thing — after all, that's one of the wonderful things about people, how different we all are. But Caroline is right: now that people from all over the world have the ability (through social media, blogs, sites, etc.) to connect with one another based on how they differ from others, our collective attention is often on our unique values, beliefs, likes, and dislikes. As Caroline wrote in her newsletter, "we are deeply protective of our own values and beliefs, which leads us to immediate focus on difference rather than sameness."

Most of us love identifying with things that separate us from one another, even in the smallest of ways. (Religion and politics aside, consider the on-going debate between dog people and cat people.) We divide ourselves by identifying differences in order to connect with those who share similarities. Most of us want to stand out from the crowd — to be different a way that makes others take notice — and yet we also want a tribe of people who understand us, who share similar beliefs and preferences. This complex dynamic is what causes us to look for the differences in others. When we encounter differences that don't mesh with our own beliefs, we might question these differences. When we encounter differences that do mesh with our own beliefs, we tend to highlight those differences in order to create bonds based on them.

This isn't always a bad thing. For example, I love to bond with people who share the same "differences" I do — being vegetarian, not drinking, being a dog person, being obsessed with various animals and trends and holidays (see Pinterest), etc. It feels good to connect with like-minded people who share some of the same quirky interests I do. It's fun to bond with people who are different in the same way. But, after pondering the same/different dichotomy, I'm starting to wonder if maybe focusing on people who are "different like me" might have some negative repercussions.

Even if the connections created from similar differences are positive, focusing on the way others are different or, as I more frequently do, the way I'm different, takes away from open-mindedness. And, without an open mind, we might miss out on people who are completely different from us but who have an awesomeness we could use in our lives.

Having the knowledge that seeking similarities can have positive benefits is one thing, but actually being aware of them is a bit more challenging. As Linda Ellerbee said, "People are pretty much alike. It's only that our differences are more susceptible to definition than our similarities."

Perhaps this is why we love differences so much: we can define them. It's pretty easy to take note of the way others are different and either like or dislike those differences. But to notice the ways we are the same... well, that takes some more effort. It's sometimes easier to connect based on smaller differences (i.e., women who have kids vs. women who don't) instead of connecting based on broader similarities (all women, all human). But, even if it's harder to do sometimes, I believe taking note of similarities is important when it comes to creating positive connections with people around you.

Pay attention to the people around you -- both those you're familiar with and those you don't know well — and, instead of looking for differences between you and them or between you and them and the rest of the world, try to focus on the ways you are similar. Taking note of commonalities will not only help you have stronger bonds with those around you, but it will also help you create a stronger relationship with yourself by showcasing to you the ways you're wonderfully similar to (and connected with!) the world around you.