are you who you want to be? 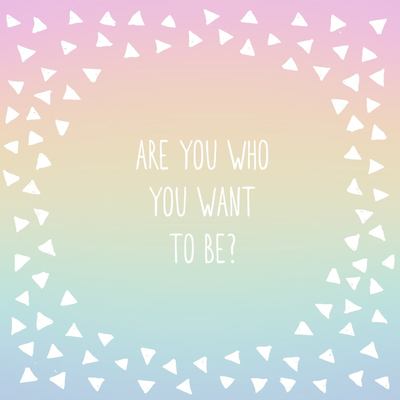 About a week or so ago, I stumbled across the question, "Are you who you want to be?" and it stopped my in my tracks. Immediately the wheels in my mind started turning. Was I who I wanted to be? How would I even define that? It's always difficult to define oneself, but to define who want wants to be seems to be even more challenging.

But it's a worthwhile challenge, because how often do we really stop and think about whether or not we're living our lives the way we want to? We're usually so busy living (which isn't a bad thing!) that we don't pause to contemplate if we're living the way we would actually like to be living. We get so caught up in crossing off our to-do lists that we rarely think about whether or not those tasks are truly things we want to be doing.

I think it's time we all take a moment, stop what we're doing, and look around. It's time we all asked the scary-but-essential question, "Am I who I want to be?"

When I reflected on that question, I found it wasn't a simple yes or no answer. In some ways I'm absolutely who I want to be. In others . . . not so much. And the more I thought about the areas of my life in which I'm not what I want to be, the more I realized that the main roadblock standing in the way of being the person I want to be was me.

It's not that I can't be the person I want to be, it's that I'm not letting myself be the person I want to be. I stand in my own way more often than not with phrases like, "I am..." or "I'm not..." When I define myself as one thing (even a good thing), I limit myself to staying as I am and prevent myself from becoming what I might be. I think we all do this. We want to define ourselves, but in doing so, we limit what our future selves might become.

Which is why I think we need to let ourselves be open to the idea of being other than what we are. We need to give ourselves permission to be who we want to be, even if we don't necessarily identify as that type of person right now.

I'm not talking about tangible things, like being an astronaut or a movie star (though, by all means, go for those dreams if they're what you want). I'm talking about the intangible states of being — being brave, outgoing, creative, positive, strong, peaceful, playful, whatever it is you want to be but might not feel as if you actually are. It's time to give yourself permission to be that person, to embrace whatever adjective you usually place after, "I'm not..."

Embracing new states of being isn't only about identifying with your potential to embrace the person you want to be, but the first (and most important step!) is allowing yourself to envision yourself as that person. For example, I often say, "I'm not a healthy eater," and with those words I deny myself permission to actually be a healthy eater. Stating, "I'm a healthy eater" won't automatically make me eat healthier foods, but if I actually want that sentence to become part of my identity, I have to begin by allowing myself to say it.

You can move toward whatever it is you want to be by the simple act of allowing yourself to consider yourself as that person. Start by giving yourself permission to be who you are not (and maybe who you never really thought you could be). Signing your own permission slip of open-mindedness will open up opportunities for becoming who you want to be.

It might sound a bit silly — a permission slip to be something — but allowing your mind to be more open is essential first step for heading down a path to being the person you want to be and sometimes putting that new concept down in writing can help turn it from an idea into a reality. Print it, fill it out, and give yourself permission to be who you want to be! 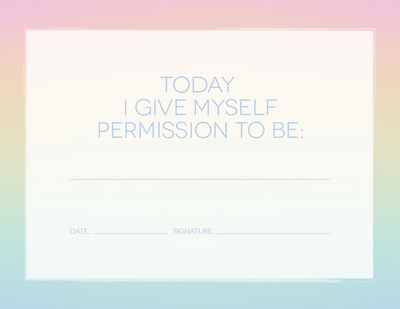 I always find this a hard question to answer. I'm always evolving and learning more about myself, changing my mind, getting annoyed at the way I've been, then starting the process again.
I love the idea of "giving yourself permission" to just be whatever it is you are that day.
Too hard to put it in a box.

Excellent post. I've been thinking about this question a lot as I move towards a milestone birthday in Sept. Like you, I am and I am not who I want to be. One particular area stands out for me: I've always felt like I was afraid of many things. I didn't allow my fear to keep me from doing what I really wanted, but it was definitely a factor. With a close friend's encouragement, I've been trying to see myself not as "afraid" but as "brave"--in fact, I've taken "brave" as my word of the year. I often think to myself, what is the brave thing to do right now? I'm beginning to identify myself less as a scared person, and that is making a real difference in my life.