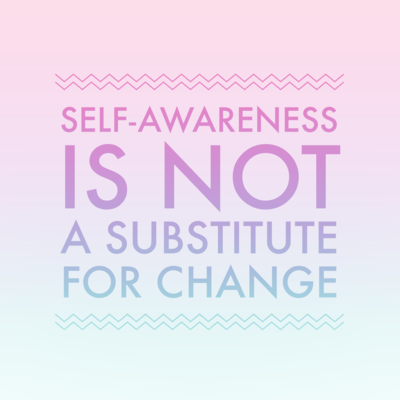 If you're reading this site, you probably have some level of self-awareness, an understanding of your character, feelings, strengths and weaknesses. This awareness is awesome; being aware of yourself can provide you with a greater understanding of how you interact with the world and with others, which is an essential first step to improving the self.

This all sounds a bit abstract so let me use a personal example. I consider myself an introvert who would like to be more social. Most of the activities I love doing (reading, writing, drawing) are solitary, but I realize that, much as I claim to be antisocial, I actually receive a lot of positive benefits from interacting with others. Over the years, I've come to really identify with the notion of being an introvert who should probably socialize more. At one point, I was proud of myself for coming to the realization that I should push myself to be more social. The "I should be more social" mantra became part of my identity and I embraced it. I would make self-aware jokes about spending more time with dogs than people; I'd laugh about how I should get out more while resigning myself to the fact that I would probably end up staying in.

I was aware — and accepting — of the fact that I was an introvert-who-should-get-out-more. This acceptance felt like a badge of honor. I was recognizing that I needed to change! I was aware of my socializing preferences but was willing to concede that I should push myself out of my comfort zone! I was proud of my ability to be so self-aware, to accept myself for what I was. This acceptance was all well and good — aside from the fact that I identified with it so much that I backed myself into a solitary (and sometimes lonely) corner. I was so pleased with the fact that I was aware (and accepting) of my I-should-get-out-more mentality that I never stopped to ponder whether or not I should actually do something with this knowledge of myself.

Being aware of some aspect of ourselves is important, but taking action (and making a change if necessary) is much more important. Awareness is a great first step, but action is where it's at. In my case, I believed awareness of my antisocial tendencies was such a breakthrough in my thinking that I allowed myself to just accept that notion of who I was without taking action. But more recently I discovered that being aware of something that needs changing isn't enough; that awareness needs to spark action.

EMBRACING THE IDEA OF CHANGE

Changing is rarely easy, but it's essential for self-improvement. For example, I'll probably always lean towards introversion (and I'm okay with that), but simply laughing this off and identifying myself as an introvert who should probably get out more isn't self-improvement. I often joke about how I'm introverted and like to stay at home, knowing full well that this isn't 100% true. Yes, I do enjoy my alone time, but I don't always want to be alone. Being able to joke about it means I'm aware of it, but it's not changing the fact that I want to be more social.

Instead of questioning the statement I made frequently — "I should get out more" — I accepted it as part of myself and, as a result, it became part of who I was, a running joke with friends that I'd be unlikely to attend an event because I liked being at home, an absence of invites because everyone who knows me well knows I won't [drive that far/go out in the snow/leave my dog for long periods of time].

My self-awareness allowed me to accept the notion that I wanted to be more social, but instead of doing anything about it, I just laughed it off, choosing to stay in over accepting invitations to get out, identifying with the notion of introvert-with-extrovert-dreams. I thought that if I was laughing about it — if I was aware enough about this aspect of myself to make fun of it — I was in some way enlightened. But that kind of enlightenment will never lead to self-improvement.

If I wanted to be truly self-aware, I'd have to recognize that my desired level of social interaction doesn't fit in one of two boxes (introvert vs. extrovert). I'd have to come to accept that, while I might enjoy alone time a bit more than others do, I'm not content with being alone all of the time. And, most importantly, I'd have to use this deeper awareness to initiate change, to push myself out of my comfort zone and actually get out more, instead of simply saying I should.

And so I did. I reached out to more people and initiated social activities. I accepted more invitations (even when it was cold and I would have much rather have snuggled down in my apartment with my dog). I pushed myself to drive farther, stay out later, say yes more often. I took my self-awareness and I used it to initiate change. I embraced change (albeit in small bits), and I turned my awareness into action.

Choosing to step past awareness and take action wasn't a simple feat for me. It meant removing the labels I've placed on myself. It meant putting myself in situations that made me a little bit uncomfortable, but that pushed me to actually have a better understanding of myself. Making changes isn't easy, but the longer we talk about them without taking action, the more difficult the change will be.

It's important to step past self-awareness and into a place of change. Of course, some aspects of the self won't need to be changed, but for those that aren't quite right (you'll know them by the fact that they don't feel authentically, truly you), acknowledging them isn't enough. If you want to create a positive, present environment for yourself, you have to take what you know about who you are and make changes where necessary. You have to take your self-awareness and use it as a stepping stone for self-improvement. Changing the way you think about yourself is important, but changing the way you act is essential.