why you should stop saying should 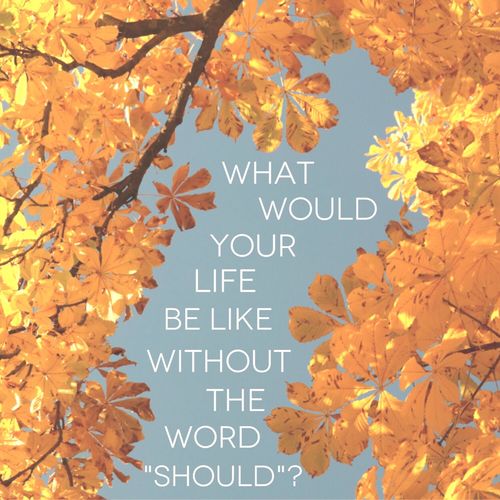 Should. It's a small word, but it has a pretty big impact on the way we think about ourselves and others. It's a word I don't contemplate often, but frequently use — and I don't think I'm alone in this. But, after reading Kate Bolick's Spinster: Making a Life of One's Own (part memoir, part cultural exploration of the unmarried woman that I found very eye-opening), I've spend a lot of time thinking about the word "should" — both in the context of my relationship status and in a more general sense. I've done a little digging into what "should" means for me (and for most of us), and I've been pretty surprised by how influential the concept of "should" really is.

"Should" is a commonly used part of most of our lexicons, but it can become so pervasive that we don't even think about how (or how often) we're using it. How many times have you thought to yourself: I should be...  or S/he should...  You've probably had one of those thoughts already today. I certainly have! As someone who tends to buck anything I'm "supposed" to do (a result of falling into this Rebel category, I think), I find myself quite often thinking I should be doing something other than what I am doing. (For example: I should be writing right now. I should be more settled. I should be wearing real clothes and not sweatpants...) If you're like me, you probably experience quite a few "should" thoughts yourself.

At first glance, "should" feels like it might be a positive, motivating word. It can guide us to do what's best for us... right? Well, the more I think about, the more it seems to me that "should" is a pretty negative word. In fact, it's almost the opposite of being positively present. It's focused on what's lacking (not very positive) and it's focused on something other than what's happening (not very present). Here are some of the reasons you might want to kick "should" out of your vocabulary...

SHOULD ISN'T A GREAT MOTIVATOR.

SHOULD TAKES YOU OUT OF THE PRESENT.

The word "should" is always focused on what should have happened in the past or what you expect to happen in the future, making it the exact opposite of staying present. Even when the word is referring to the present moment (as in, I should be working right now...), what it's literally means is: In the next moment, I should begin working because I'm not working right now. In the present moment, like it or not, you're not doing what you "should" be doing. A lack of acceptance for what's happening right now (regardless of whether that thing is positive or negative) is one of the best ways to become unhappy and stressed.

SHOULD STEALS YOUR AUTONOMY.

Because "should" isn't a great motivator (see above), it often leaves you feeling frustrated when you're not doing what you think you should be doing. When you don't accomplish what you've tried to motivate yourself to do, you can feel as if you don't have control over your own actions. For example, if you think to yourself, I should stop reading and get to work, but you keep reading anyway, it feels as if you're not in control. Because "should" takes your focus away from your current actions, it takes away from the freedom to do what you want to do (even if that activity isn't what's expected of you).

One of the biggest downsides of the word "should" is that it doesn't allow you to accept what is. When you think something or someone should be different, you're not focusing on what's actually happening. You're contradicting what is, for no purpose other than to fuel your own expectations. This also applies to inner "shoulds," like, I shouldn't be feeling jealous of my best friend, or I should be happy for him even though I'm very angry with him. Instead of expecting yourself to feel a certain way (and labeling those feelings as good or bad), what if you just accepted them for what they are? What if instead of challenging those feelings, you accepted them and looked at them more closely for clues about who you are?

Just as "should" contradicts the present moment, it also negates self-love. Focusing on "should," you're taking a step away from loving yourself. You're focusing on aspects of yourself that could be rather loving what already is. When you use the word "should," you're not embracing a true acceptance of yourself (including the parts you don't love...). Should is like a judging pair of eyes, looking at you disapprovingly. With the word "should," you're casting judgment on yourself and, more often than not, you're devaluing yourself by allowing feelings of "less than" to creep into your consciousness.

Instead of focusing on what's been done, "should" focuses on what could be done differently. What if, instead of focusing on what you want to do, you focus on what you've done? I recently started tracking what I've accomplished each day alongside my to-do list and it's been so interesting to see how much I actually accomplish on the days I feel like I've "done nothing." Even when you don't feel as if you've adhered to others expectations (or your own), there are many, many things you've done well. Should doesn't let you focus on those, which is another reason you might be better off without it!

Okay, so now you probably see what a negative impact should can have on your thoughts and your life. But what are you supposed to do about it if you find yourself using the dreaded "s" word? How are you supposed to get things accomplished without knowing what you "should" be doing? Here are some of the best tips I've found...

Most of us have the word "should" pretty engrained in how we think and talk, making it a difficult word to completely remove from our lives, but if we're open to being aware of how we use it (and when), we'll be more likely to cut down on the amount of "should"s in our lives (or at least understand why we have the "should"s we do!). Think about what your "shoulds" are and see if you can reframe them in a positive (and more productive!) way. 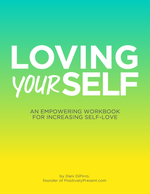 Want to empower yourself with some serious self-love and acceptance? Start loving yourself (or increase the love you already have for yourself!) with the inspiration and motivation found in Loving Your Self: An Empowering Workbook for Increasing Self-Love. Filled with uplifting encouragement, thought-provoking questions, and engaging exercises, Loving Your Self is an essential tool for mastering the art of self-love. Learn more about the workbook here and purchase your own copy here.

I use "should" more than I ought to, and never really considered the negative implications such a simple word can have. I always say I "should" write more, I "should" be taking care of chores, or "should" be doing something besides what I am currently doing. Really not a good thing, especially when I'm spending time with my spouse, or family, and could instead focus entirely on them.

Thank you for sharing this thought-provoking read!

Thank you for this post. I am working on removing (or at least diminishing) "should" in my vocabulary. Your post, however, gives me actionable practices that I can use to make that happen instead of thinking, "I should really stop saying should." :)