ABOUT SUBSCRIBE BOOKS ART PRINTS CONTACT PATREON
6 self-love lessons from alice in wonderland (part I)
should you stay or go? : 5 questions to help you choose 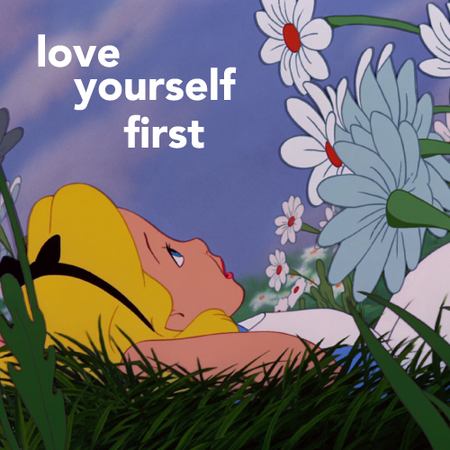 As you might of seen last week, I wrote about two of my favorite topics: Alice in Wonderland and self-love! Today I'm catching you up with the second half of the amazing self-love lessons from Alice. If you haven't already, check out PART I for the first three lessons (and some background on Alice). 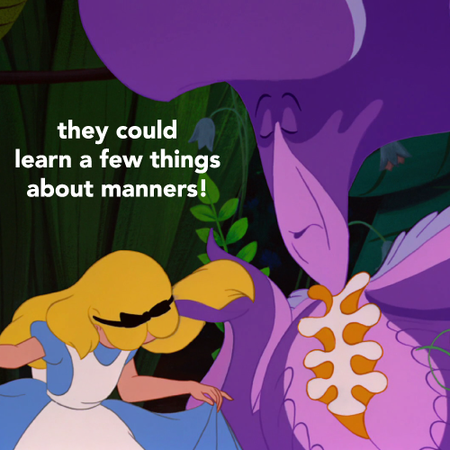 Rose: Just what species or, shall we say, genus are you, my dear?
Alice: Well, I guess you would call me... genus, humanus... Alice.
Daisy: Ever see an alice with a blossom like that?
Orchid: Come to think of it, did you ever see an alice?
Daisy: Yes, and did you notice her petals? What a peculiar color.
Orchid: [sniffing Alice's hair] And no fragrance.
Daisy: [chuckling, as she lifts up one side of Alice's dress] And just look at those stems.
Rose: [as Alice slaps the Daisy's leaves away] Rather scrawny, I'd say...

When Alice initially encounters a garden of talking flowers, they are polite, welcoming, and curious about her. As she spends time with them, however, they quickly turn judgmental, negative, and cruel. As soon as the flowers start poking and prodding her, judging her appearance and picking on her, Alice removes herself from the situation, quickly exiting the garden and murmuring, "You can learn a lot of things from the flowers! Huh! Seems to me they could learn a few things about manners!" She recognizes the flowers' rudeness and refuses to tolerate it -- and this isn't the only scene in which she leaves a negative situation or character. In fact, in many of the scenes in the film, Alice faces rudeness, nonsense, or bad behavior and, rather than tolerate it, Alice leaves.

This is one of the most essential self-love lessons we can learn from Alice: if someone is treating you poorly or is bringing too much negativity into your life, get away from that person. Now, this is obviously not as easy as stomping out of a garden if you've been invested in this person or your relationship is very intertwined with other aspects of your life (like work or parenthood, for example), but if you want to truly treat yourself with love, you have to get away from those who don't treat you well. In addition, it's important to seek out positive people -- people who will encourage you, uplift you, and inspire you. The fewer negative people you have in your life, the more room you'll have for these positive influencers. 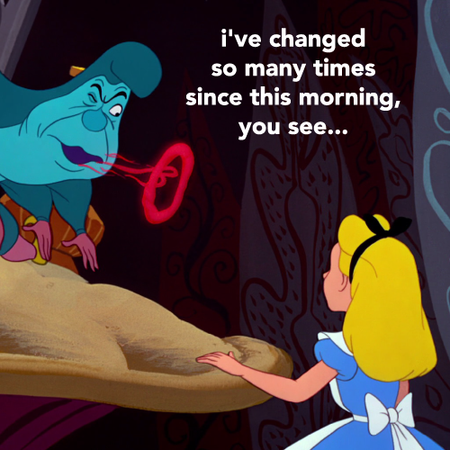 Caterpillar: [meeting Alice] Who... 'R'... 'U'?
Alice: I- I hardly know, sir. I've changed so many times since this morning, you see...
Caterpillar: I do not 'C.' Explain yourself.
Alice: I'm afraid I can't explain myself, sir, because I'm not myself, you know.
Caterpillar: I do not know.
Alice: Well, I can't put it any more clearly, sir, for it isn't clear to me.

When Alice encounters the Caterpillar, one of the first things he does is ask her who she is (in quite a demanding and aggressive way, I might add!). If asked the same question, most of us would probably respond with our names, as we use those to identify ourselves to others. But what does it mean to be "[your name]"? Who are you really? How would you describe yourself to someone else? These are hard questions to answer -- and one of the reasons I created the Finding Your Self workbook! -- but they are important when it comes to self-love. It's difficult to love yourself, after all, if you don't know yourself. It's important to get to know yourself as best you can, but it's equally as important not to limit yourself with labels.

Alice, because she's been through so much and changed physically in many ways since entering Wonderland, doesn't know how to answer the Caterpillar's question concerning who she is. She's changed a great deal, making it difficult for her to define herself. Like Alice, we also change a great deal over time. The person you are today isn't the person you were five years ago -- and that's actually a good thing. When we don't change, we don't grow. One of the reasons some people don't change much is because they often limit themselves to a definition of what they should be (or have been). While it's wonderful to have a sense of self and know who you are, this scene in Alice in Wonderland reminded me that it's also good not to limit yourself with internal or external expectations. It's okay not to know exactly who you are, to want to change, or to feel you have changed. It's okay not to be completely clear on who you are -- so long as you treat yourself with compassion and love. You don't have to fully understand yourself to treat yourself with understanding. 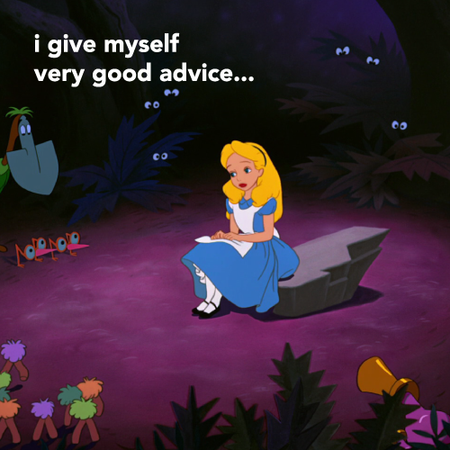 LESSON 6: LISTEN TO YOUR OWN GOOD ADVICE

Alice: I give myself very good advice. But I very seldom follow it. That explains the trouble that I'm always in.

This last lessons is, what I believe to be, one of the most important. Toward the end of her time in Wonderland, Alice feels completely lost and uncertain about how to find her way home again. The path she was heading down literally disappeared and she's alone in the Tulgey Woods with no sense of which way to go. In this scene, Alice sings one of my favorite songs, "Very Good Advice," (watch the video here!) all about how she gives herself very good advice but very rarely follows it. You're probably well aware of how much easier it is to give good advice than it is to take it, but one of the greatest acts of self-love is giving yourself good advice -- if this is hard, imagine what you'd tell a friend in your situation -- and actually following it.

More often than not, we know the right thing to do -- the thing that will ultimately make us happy and fulfilled -- but a lot of the time, the right choice isn't the easiest one to make, which is why we sometimes don't take our own advice. But consider, for a minute, what your life would be like if you did the right thing every time, if you made the choice you know someone who truly loves you would make for you. You can do that. You can be the person that loves you enough to push you in a positive direction -- even if it's hard to do so in the moment. The next time you're faced with a tough choice, try to take your own good advice and see what happens. Challenging as it might be, it's a brave and worthwhile act of self-love.

I hope you've enjoyed these inspiring self-love lessons from Alice in Wonderland. If you haven't seen or read Alice in awhile and you want to check it out, here are some of my favorite Alice-related things:

Through the Looking Glass (original 1872 edition)

I love this. Alice in Wonderland is one of my absolute favorite movies, but I'd never recognized some of these messages. Thanks so much for sharing. :) XOXO
http://bybailey.weebly.com/

I loved your Alice in Wonderland self-love lessons! Thank you!

I found an old copy of this book recently, at a thrift store (non-Disney version.) It has lovely illustrations. I immediately thought of you. =)
Enjoyable post. =)