A Pup's Guide to Being Present 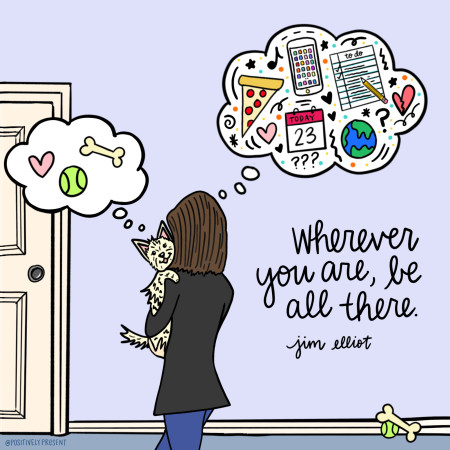 This weekend I had the privilege of having not one, but two dogs in my home, as I was dog-sitting for a friend. I spend a lot of time with my pup, Barkley, but something about having two dogs, and perhaps being more attentive than I am on a day-to-day basis, made me reflect on how skilled dogs are at staying present. While they don't do it all the time (I can definitely tell when Bark is stressed or anxious about something that just happened or is about to happen), they do seem to be much better at staying in the moment. Of course, they have the added benefit of not having quite as much on their minds as humans do, but that doesn't mean we still can learn from them.

Here are some of the mindfulness tips I was reminded of over the weekend. Learn from the the wisdom of pups! (If you're looking for additional inspiration on pets and mindfulness, I highly recommend the book Guardians of Being by Eckhart Tolle and Patrick McDonnell. It's adorable and insightful.)

Do less every day.

Pups don't overwhelm their schedules with lengthy to-do lists, appointments, and activities. Pups (and most pets!) know how to take it easy. They spend most of the day relaxing and another good chunk of it playing, going for walks, eating, etc.. We'd all probably love to live a life on a pup's schedule, but since that's impossible for most of us, we can at least strive to do less each day. We can make fewer appointments. We can schedule fewer activities. Yes, some things must be done, but take a look at your to-do list and see if there are tasks that maybe aren't so essential.

Even if you have an anxious pup (like Bark!), pup still don't worry as much as humans do. Worrying, as you might know, doesn't really do anything. It's completely unproductive, but yet many of us spend a lot of time doing it. What we should do instead is determine if there's something we can do about a worrisome situation. If we can, we should take action. If we can't, we should do our best to let the worry go.

There's no joy quite like that of a dog with a beloved toy. Barkley, for example, loves this one blue ball she has. You can just see the joy on her face when she runs for the ball, or even when I say the word "ball." As humans, I think we all have things like this, situations or things or people that make us feel completely joyful. Unfortunately, we don't always allow ourselves to experience it fully and without inhibition. Take a lesson from a pup, and allow yourself to feel complete and total joy without fear of judgment.

And speaking of judgment, the lack of it is one of the most precious assets of any pup. Pups might have preferences for certain things, as we all do, but they don't judge people or themselves. Have you ever seen a pup look in the mirror and complain about her appearance? Yes, I'm aware that they don't have the mental capacity to do that, but still, it's something we should be inspired by, even if it's much more difficult for us, as humans, to attain.

Life's got its highs and lows, for both pups and people, but consider how dogs handle most situations: they cope. If they're hot or cold or tired or hungry, they deal with it. Yes, sometimes there's a bit of whining involved, but generally they make the best of where they are until things get better. We could all learn from this. Yes, sometimes it feels good to vent, but more often than not, complaining only makes a difficult situation worse.

Whether its intentional or not, most people create some bit of drama for themselves. Sometimes it's purposeful (stirring the pot, as my mom would say) and other times its unintentional (not being as straightforward as you could be, for example), but regardless of how it happens, its something we have the power to become aware of and transform. Dogs don't create drama for no reason. They face situations head-on without rationalization or blame -- and we'd be a lot better off if we did the same!

Pets and their owners have a unique and magical kind of unconditional love. Because humans are more complex, it's not always easy to have such a simple, nearly flawless connection with them, but it doesn't hurt to consider how you'd treat your pup if s/he made a mistake vs. how you'd treat a person. The love between pups and people is strong and, typically, unwavering, and it would help us all if we made that kind of connection our goal with other humans.

One of the best things about having a pet is how much they notice. Barkley is particularly adept at noticing any changes in her environment and investigating them for more info. We, as humans, are often rushing around and fail to notice the little things. If you have a pup, take him/her on a walk and take note of everything the pup notices. Whenever I do this, it really helps to make even the most mundane things more magical.

For most people (including me!), mindfulness is a challenge. But if we were able to adopt some of these lessons from the pets in our lives (or at least try to adopt them), we'd all be a lot more mindful. Staying present takes practice, and I'm thankful to have a present-minded pup in my life to inspire me. If you have a pet, pay attention to how amazingly present they are most of the time. If you don't have one, hopefully these tips from Bark will give you some mindfulness tips you can put into practice in your own life!

Love this post! Our animals can teach us so much. And I love Guardians of Being--what a sweet, sweet book.

Throughout this article, I found myself with an uncontrollable desire to look over at my three pups and think, "Yep, they just get it." Valuable lessons can be learned from those closest to us...even the four legged kind.

The know how much sleep and rest the require. They do not sacrifice their health for inconsequential things. I can't tell you how many people I know that don't seem to understand this. Everything must be done here and now regardless of the impact that it has on health. Pups understand the importance of health and maybe one day, a few more humans will too.

Joel - So glad that you, too, appreciate the great lessons we can learn from our pups. (How lucky that you have three!!) So great that you brought up the point about rest and health -- I'm actually writing another pup-themed post right now and that's something I bring up in it!

Dani, I recall you did a blog on losing a pet. What guidance can you give to help deal with grieving the loss of a beloved pet?

Amy - Yes, I did. Here's the link: http://www.positivelypresent.com/2013/03/morning-sickness-coping-with-loss.html. I'm so sorry if you or someone you know has lost a pet. It's one of the most challenging experiences, but it does get better with time. If you click the "dogs" link to the right, you can also find more pup-related posts. If it was you who lost a pet, I'm so sorry for your loss. Sending love to you!