The Creativity of Worry 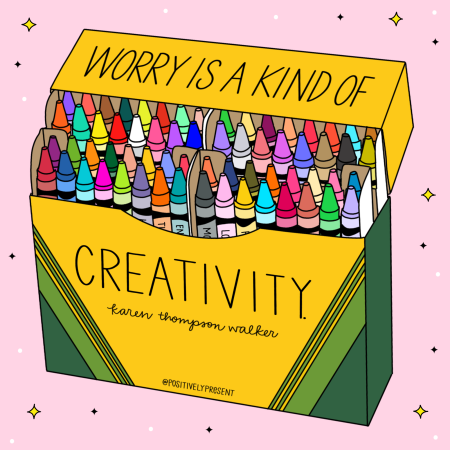 While reading Karen Thompson Walker's The Dreamers, I came across the quote, "Worry is a kind of creativity," and it really made me think about worry in a different way. Sure, worrying can be a soul-crushing nightmare at times, but it is kind of cool that I can imagine so many things in my mind that have never (and likely will never) happen.

I've always been a worrier (that's what we used to refer to it as back in the day before "anxiety" became a buzzword), and I've always considered it to be a mostly negative trait. Yes, worry has helped me be prepared in some cases, but, for the most part, worrying has wasted my time and drained my energy. Often, things I worry about don't happen or, if they do, I often find that, no matter how terrible the situation, the worrying had actually felt (or made it) worse.

Most of us, particularly those with anxiety, know that worrying isn't usually helpful. It causes tons of unnecessary stress. It creates pain where there need not be any. It has negative effects on your body. Excessive worrying can cause anxiety attacks, lead to harmful, self-soothing habits, and have serious impacts on the body. Plus, worrying is often irrational, and knowing it's irrational and still being unable to quell it can be immensely frustrating and distressing. Point is: worrying isn't great. But Walker's quote made me think that maybe it isn't all bad.

Over the years, I've found lots of ways to cope with worry (some healthy, some not-so-much), but even when I manage my worry to the best of my ability, it's there. I'd like to think one day I'll get to a worry-free state of living but, based on the past 35 years, I'm not holding my breath. So reading Walker's quote oddly made me feel a bit more at peace with my worry. It made me realize that, for decades, I've been making up stories in my head of all the things that could go wrong in a given situation. Was this useful? No. Has it harmed me in a variety of ways? Yes. But, still: it's pretty fascinating to think of all the situations I've imagined. And, useless as worry has often been to me, reading this quote made me think that maybe, just maybe, it actually has some sort of value.

Now, I'm never going to argue that worrying is something we should all do more of because it makes us more creative. Worrying isn't some creative exercise I want to practice. But, if I'm going to worry (like it or not), why not focus on the oddly positive element of creativity tucked in the folds of anxiety? If I'm going to worry, why not stop resisting it so much (shout out to all the worriers worrying about worrying too much!) and just see what happens if I see it as a side effect of creativity?

I hate the "tortured artist" trope, but just because something is bad doesn't mean it's not true, and, based on personal experience (and quite a few studies, it seems), a lot of creative people are worriers. Whether they're creative because they worry or they worry because they're creative is hard to say, but worry seems to be a pretty common thread among a lot of creative people. Van Gogh once wrote, "I am unable to describe exactly what is the matter with me. Now and then there are horrible fits of anxiety, apparently without cause, or otherwise a feeling of emptiness and fatigue in the head … at times I have attacks of melancholy and of atrocious remorse." I mean, SAME.

The reason so many creatives — including myself — are worriers has a lot to do with one thing: imagination. On one hand, we can imagine things to write or draw or paint or sing, but, on the flip side, we can also imagine all of the horrific things that could go wrong in any situation. I'm not saying that all creatives do this, but it seems like it's pretty common. Anxiety and creativity seem to be linked in a lot of people. Does it have to be this way? Maybe not. But that doesn't mean it isn't this way for a lot of people, and, from what I've learned, this link between the two has been around forever. As Laura Swinton wrote in this article on anxiety and creativity,

“Anxiety is a qualification of dreaming spirit,” wrote Danish philosopher Søren Kierkegaard. Noting that it’s a somewhat different emotion from plain, old, destructive ‘fear’, Kierkegaard thought of anxiety as the inevitable ‘dizziness’ that accompanied any creative leap. Anxiety, he wrote, is the result of freedom, a signifier of the ‘possibility of possibility’ – where fear is definite, anxiety is open-ended and ambiguous. It’s an idea that resonates – about a century later, T.S. Eliot described anxiety as ‘the handmaiden of creativity’. Whether anxiety is an aid to creativity or the price of entry, the two seem to be linked.

Within a creative imagination, anything can happen. Wonderful things. Horrific things. It's all there – all the possibilities. "Possibility," unlike worry, is generally seen as a positive term, but too much of anything (and the possibilities are endless in a creative mind) can be very bad. While I wish the link between possibility and worry didn't exist (I'd love to be worry-free!), I do appreciate the fact that there's a yin-yang element to the imagination. Yes, worry can be awful and oppressive and downright debilitating (especially when in a season of change, as I am right now), but the imagination – the very thing that also causes worry – can also be amazing and eye-opening and inspiring.

What Walker's quote made realize is that worry, while terrible at times, is at least interesting. Would I trade my creativity for a worry-free life? Some days the answer would most certainly be yes. But when I take a step back and consider it more objectively, I don't know. There's just so much wonder and pure joy that comes from creativity that I just don't know if I could give it up, even if sometimes my anxiety is so dizzying that I wonder if I'll ever regain my balance.

What do you think? Do you find worry and creativity to be linked? Do you think they always have to go hand-in-hand? I've personally never experienced creativity without worry (nor have I ever met a creative person who wasn't a worrier), but maybe they don't have to be tied to one another? Part of me thinks embracing the connection between worry and creativity isn't great (is it glorifying worrying in some way?), but, as a worrier, I know that worrying isn't always a choice, so why not try to find the good in it? I'd love to know what you think! Let me know your thoughts in the comments below!