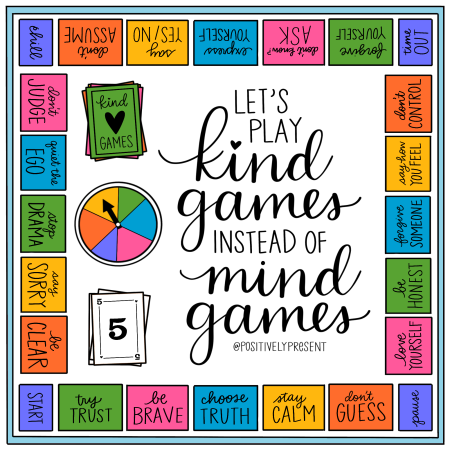 Get this print in the shop here!

If you follow me on Instagram, you might've seen this recent post, where autocorrect changed my caption from "mind games" to "kind games." Not surprisingly, this led me to think about what "kind games" might consist of since, even if you're not intentionally playing mind games with those around you, most of us do some game-playing. Anytime you're not clearly and effectively communicating with others — intentionally or unintentionally — it's a kind of game (at the very least, a guessing game!).

No matter how much you might aim for healthy, communicative relationships, it's hard to always get it right. No matter how well you know someone, it's challenging to convey yourself accurately (particularly if you don't even fully understand how you feel which, let's face it, happens sometimes!), and it can be a daunting task to comprehend others, even when they do their best to share how they feel.

Communication is a kind of kindness. The better you are at expressing yourself (and understanding other others express themselves), the better your relationships will be. But if you're anything like me, knowing that isn't the same as doing it. I know how valuable good communication is — in work, in socialization, in romantic relationships — and still I struggle greatly with it because it requires bravery, vulnerability, and a self-awareness that sometimes I just don't possess.

Effective communication has been an issue for me in almost every relationship I've been in, and, much as I hate to admit it, I've been guilty of playing a mind game or two. Often it's not calculated or mean-spirited, but, regardless of the intention, mind games are unkind (and very unproductive!). Here are some of the ideas that came to mind when I started thinking about how I could turn mind games into kind games...

COMMUNICATE HOW YOU FEEL

ASK ABOUT HOW OTHERS FEEL

If you don't know how someone else feels (if you're not 100%, absolutely sure!), ask. I know it can be awkward sometimes, but just think of how many conflicts you could have already avoided if you'd just asked instead of assuming. Assumptions seem like they save time, but they often make things way more complicated, which isn't kind for anyone.

APOLOGIZE WHEN YOU'RE WRONG

If you mess up, say you're sorry. Actually say it. Don't offer an explanation and leave it at that, assuming the other person knows you're sorry. Apologize out loud (or in writing if that's not an option) and mean it. (Advanced version of this game: apologize to, and forgive, yourself, too.)

EXPRESS WHEN YOU'RE HURT

When someone's hurt you, let them know. You can be honest without being dramatic or hurtful. (It's not easy, but practice helps!) You can set your ego aside and express how you feel without shame or fury. It's a tough game to play sometimes, I know, but remember: communication is a kind of kindness.

SAY YES / NO WHEN YOU WANT TO

Pay attention to how you feel, and if you feel like you're trying to gain control of someone or something, take some time to figure out why you're seeking control (hint: usually it's about you and not them), and knock it off. Most of us don't want to control or manipulate others, but do so without realizing it. Recognize it, then stop.

Don't judge yourself or others so harshly. Everything — everything — is so much more complex, so much more entangled, than we realize. One thread tugged and everything is shifting ever so slightly. It's happening all the time in a million different ways so don't be so hard on yourself or anyone else. We're all doing what we can with what we're given.

TAKE A TIME OUT WHEN UPSET

How many negative interactions might you have avoided just by pausing before reacting? It only takes a little bit of time but if you wait before reacting to someone else when you're upset, you'll be doing both of you a great kindness. A deep breath, a walk around the block, a day alone. Take time to chill out.

There are so many ways to practice kindness, of course, but one of the most important (albeit most difficult) is communicating in a loving, open-minded, and thoughtful way. What else would you add to this list? What kind of kind games would you like to play? What kind are you already playing?

How to Stop Black-or-White Thinking 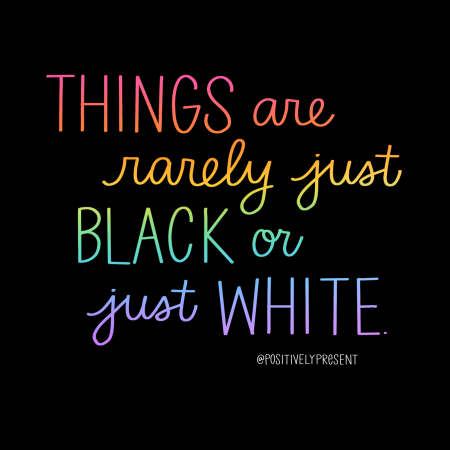 It's normal for us to want to categorizing things, to label them so we might make sense of them, but as soon as we start identifying something — as good, bad, or any other descriptor — we're limiting our understanding of the thing. (Yes, there are quite a few things that are easily and unequivocally defined, but the list of such things is likely shorter than you'd think.) Attempts to label or categorize are attempts to understand, to provide clarity for ourselves in a world that often doesn't make a whole lot of sense. But, unfortunately, these sense-striving attempts often take people away from common sense, leading them down an all-or-nothing path that ultimately limits understanding.

If we truly want to understand someone or something, we're going to have to make some effort because, like it or not, our minds just want it to be easy. Our minds want quick and easy answers and, tempting as those might be, they're not truth. Some, admittedly, would rather have a false sense of understanding than truth, but, since you're reading this, I assume you're trying your best to have an honest understanding of the world (or, at least as honest as our little human brains can make it, given our many mental and emotional limitations). So if you really want to do your best to avoid all-or-nothing thinking, to resist the temptation to label something black or white rather than looking for the shades of gray, here are some ways to combat that natural urge to take something and paint it a single color:

Combatting black-or-white thinking is challenging, but with these tips — and lots of practice — hopefully we can all learn to focus a little bit more on the nuances of ideas, situations, and people and move away from the limitations of an all-or-nothing mentality. Let me know in the comments below if you have any additional tips for conquering black-or-white thinking!

F.A.C.E. Your Feelings: How to Cope with Mixed Emotions 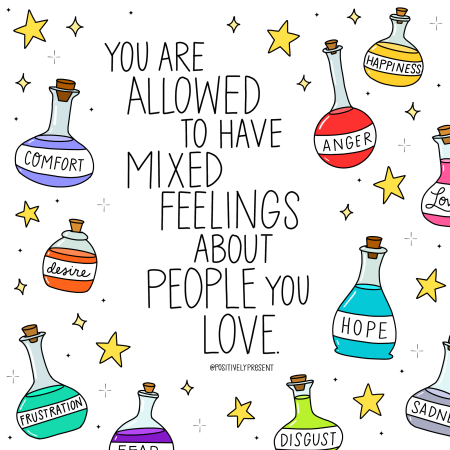 Shop this illustration in the print shop!

On the last day of the year, I've found myself reflecting on the past twelve months and, in particular, the ebb and flow my relationships. While reflecting, I realized I was trying to fit my relationships (and people!) into neat little boxes, labeled "GOOD" or "BAD," and it just wasn't working out. Because, as I'm sure you know, relationships are complex. They don't always fit clearly into boxes. They can't always be labeled clearly.

My feelings about most people, even those I love dearly, are mixed. For someone like me, who really likes to identify and label things in order to better analyze and understand them, this can be tricky. So, I decided to do what I always do when confronted with trickiness: write about it! I sat down this morning to write about the idea of mixed feelings and realized, ultimately, that it doesn't have to be a negative thing. Sure, it would be great if we could identify every person in our lives as "good" or "bad" so that we'd know who to surround ourselves with, but life -- and people! -- don't work like that.

Like it or not, mixed feelings are a part of relationships, so we might as well learn to deal with them the best we can! I came up with a little method I like to call F.A.C.E. that can help you (and me!) cope with the complicated mess of mixed feelings. This is especially useful for people you love and interact with often (as those are the people we often have the most complex relationships with!), but I bet it can work pretty well for new relationships as well as a way to figure out how you really feel about a person you're just getting to know!

FIGURE OUT THE FEELINGS

First and foremost, you have to figure out what you're feeling! This may sound obvious, but when you spend a lot of time with someone or have known them for a long time, sometimes we don't even pay attention to how we feel about them. Figuring out precisely what you feel is essential for coping with the mixed emotions. There are many different ways to feel about others, but here's a list of some emotions you might consider while figuring out your feelings (note: lots of these words aren't technically considered emotions in the psychological sense, but I find these words helpful when trying to figure out feelings):

Next, it's important to pay attention to what's happening when you're actually interacting with that person. It's one thing to sit down alone and consider how a person makes you feel, but it's quite another to tune into it in the moment. Here are three questions to consider when contemplating mixed emotions:

There is likely more than one answer to these questions depending on the day and circumstances, but paying attention to these three questions frequently will give you a better sense of how this person makes you feel overall and can clue you into nuances about the relationship that you might not have otherwise realized.

After you've given consideration to how you feel about the person generally and how you feel in specific situations, before, after, and during interactions with this person, now it's time to go a little further and consider the big question: So what? You've now got a pretty good idea of what you feel about this person, but now you have to consider what this means. Understanding the mixed feelings you have usually will lead to one of three conclusions:

Those are pretty much the options you have when dealing with a relationship, which leads us to the last step...

Recognizing your options (see 1-3 above) doesn't mean that you're actually going to take action, which is where this next step comes in. You have two choices: embrace change (if necessary) or accept things as they are, for better or worse. Sometimes, after going through these steps, you might come to the conclusion that someone is no good for you but you still might want to spend lots of time with them. That's up to you, but if you choose that path, you must accept the consequences of it. On the flip side, if you find that change (spending more or less time with someone) is necessary, it's up to you to embrace -- and perhaps initiate -- that change. Whatever the situation, it generally comes down to one of two options: change or accept.

Most of us probably run through the F.A.C.E. method in our subconscious without even realizing it, but taking the time to really deal with mixed emotions and actively choose an outcome is empowering, even if we don't always choose the thing that's best for us. There's something powerful about making a choice -- even the wrong one -- rather than just floating along and waiting for something to happen. Yes, there are two people in every relationship, but the only one you can control is yourself, so you might as well take charge of your feelings and actively make some choices, especially as we're heading into a new year!